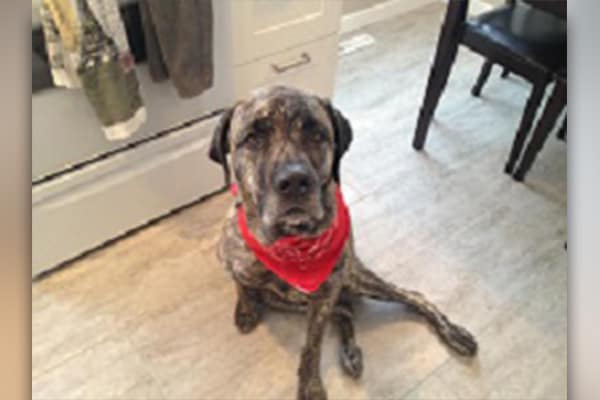 Meet Copper! This big boy found himself in the New Hope family after being surrendered to a vet clinic due to some ongoing medical issues – he required a surgery to address a ruptured cranial cranial cruciate ligament in his hind leg, as well as what appeared to be an irritable bowel/mild incontinence issue. After playing with Copper’s diet a bit and multiple tests including blood work, urine tests, and ultrasounds- it was determined that Copper most likely has Irritable Bowel Syndrome. These symptoms and issues are maintained excellently on a hypoallergenic diet. Once this was resolved, Copper needed to have his ruptured ligament in his knee repaired by a special technique called a Tibial Plateau Leveling Osteotomy (TPLO). After surgery Copper underwent 12 weeks of rehabilitation and modified activity to help him heal and carefully build back the strength in his leg.

Copper did so well and found his furever home before he had even finished all his rehab! His family loves him dearly and is enjoying this happy healthy boy!