Late one Sunday evening in November 2021, New Hope Dog Rescue posted a young border collie/husky mix named Cash. I’d been unsuccessfully looking for a dog to adopt for awhile, and Cash sounded like a promising match. What gave me pause was that his left hind leg had recently been amputated, but, with a deep breath, I submitted my application and, two days later, after conversations with New Hope and his lovely foster, Stacey, we decided to meet.

Only a couple of weeks post-surgery, Cash hobbled up the sidewalk for our visit, and my heart both broke and surged for this sweet dog with the floppy ears. With curiosity and apprehension, he came through the door and sniffed. I knelt down beside him, and took my time, but he wasn’t shy. Cash was calm and listened intently while I chatted with his fosters, but he trembled a bit after they left to let us visit. Soon he wandered around the living room making friends with my daughter and son-in-law, then hopped onto the couch beside me. I knew he was going to be my “Henry.”

Henry. I love the way the name feels as it rolls off the tongue. It’s old-fashioned, and also the name of one of my favourite characters in film: the great Henry Gondorff, played by Paul Newman in The Sting.

We spent the winter getting to know each other and, as Henry’s body healed and gained strength, his spirit unleashed, so to speak, and he pulled his way through snowy walks and spring thaw. Some training help for both of us curbed his enthusiastic pulling and we’ve been walking at a very fast clip ever since. Henry’s missing rear leg necessitates fast walks, and while I can’t run far, I know I won’t have to because he stops frequently to sniff, and sniff, and sniff.

Henry is easygoing and gentle, especially with our granddaughters, ages six and one. He loves cats and gets excited for occasional weekend visits in Saskatoon with his “cousins,” Jude, Frances, and especially Dolly.

Henry hasn’t met a single person he doesn’t like, and people find his charm irresistible. He has a particular love for my husband, Russ, who was a reluctant dog person at first. Henry won him over with his wild tail wag and attentive gaze, and they have bonded over a shared love of Swiss cheese (but not too much). After our morning walk, when it’s my turn for breakfast, Henry knows he’s going to get a few blueberries or strawberries before a nap.

Henry is a quiet dog who loves his life. That he has three legs hasn’t slowed him down and he has an observant, sometimes comical nature. When he sees someone walking by our window, he watches intently, one ear up, one ear flopped, until they disappear from view and then he runs to tell me about it through his adorable whines and an enthusiastic “come and see!” Henry does not bark, but sometimes uses his “husky talk” if he thinks I’ve taken too long to get groceries. We do have conversations, and I’m trying to coax him to do more of it because it is hilarious! For now, he is a dog of few words.

Henry is over the moon with joy now that winter has arrived, and loves nothing better than to charge through snow banks and snuffle his nose into the snow, then flip it out again.

It’s hard to believe we are about to celebrate one year with our beloved Henry, and are forever grateful to the wonderful people at New Hope Dog Rescue who brought us together. Thank you for your tireless efforts to help these sweet souls have a chance at living a beautiful life. 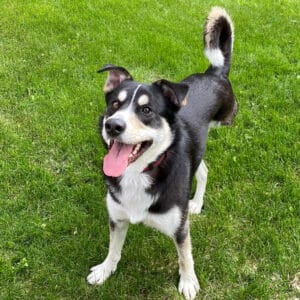